Students who engage in extracurricular activities and clubs generally attain a greater degree of achievement and belonging than those who do not participate. Therefore, students at SJPII are encouraged to examine their academic schedules and consider how they can become involved in the activities program.

Enjoy a rich variety of creative experiences with your friends and classmates, and gain skills in textile design, printing, drawing, mixed media, posters and banners. You will have opportunities to offer your creative art assistance to your school community, as well as those outside the school community. No art experience is required – just a sincere interest in having good, creative fun!

The SJPII Chapter's main purpose is to allow volunteers to spread the word about the efforts of the national organization known as Best Buddies. Being an advocate for individuals with an intellectual and developmental disability and provide them with a friend or a mentor. Best Buddies is the world's largest organization dedicated to ending the social, physical and economic isolation of the 200 million people with intellectual and developmental disabilities

Meeting to explain and share strategy techniques, the Chess Club helps new players orient the board and learn to play a game loved by all who play it!

MEETS EVERY THURSDAY AFTER SCHOOL

DECA prepares emerging leaders and entrepreneurs in marketing, finance, hospitality and management. Students interested in careers in these fields are encouraged to join DECA. The club meetings provide opportunities to learn about leadership, management, and business through club activities and successful business leaders as guest speakers.

According to Brother Gerard Rummery, FSC, a former General Councilor to the Brother Superior and Lasallian scholar, there are three doors of entry to the Lasallian World--Faith, Service, and Community. The Lasallian Youth is a club dedicated to having students access the Lasallian charism through these doors. Club members assist in various service activities both inside of school and in our South Florida community in the tradition of John Baptist de La Salle.

Model United Nations is an authentic simulation of the UN General Assembly, UN Security Council, or other multilateral body, which introduces students to the world of diplomacy, negotiation, and decision making. At Model UN, students step into the shoes of ambassadors of countries that are members of the UN, from Argentina to Zimbabwe. Open to all students, better known as “delegates”, they debate current issues on the organization’s vast agenda. They prepare draft resolutions, plot strategy, negotiate with supporters and adversaries, resolve conflicts, and navigate the UN’s rules of procedure – all in the interest of resolving problems that affect the world.

MEETS MONTHLY ON THURSDAYS AFTER SCHOOL

Our purpose is to stimulate interest in mathematics by providing public recognition of superior mathematical scholarship and by promoting various mathematical activities. Topics presented during club meetings and interest generated therein help members to gain a greater understanding and enjoyment of mathematics.

Our goal is to promote, enhance, and maintain students’ music appreciation and musical skills and styles. Members will develop better intonation, perform as a small ensemble, and become more comfortable performing in public, assisting with the Liturgical music for our school Masses. The ensemble practices weekly and hopes to include new and different songs as part of our school Masses. Any student who already plays an instrument or would like to join the vocal section is encouraged to enlist!

The Saint John Paul II Chapter of the National Honor Society has been established to recognize, honor, and develop outstanding students who have demonstrated excellence in Scholarship, Leadership, Service, and Character. The purpose of National Honor Society is to create enthusiasm for scholarship, to stimulate a desire to render service, to promote leadership, and to develop character in the students of secondary schools.

The Respect Life Club endeavors to raise consciousness about the dignity and value of every human life, from conception to natural death. Club members learn about national and international efforts to defend the most vulnerable among us, and participate in civic efforts to promote greater justice and compassion including the national March for Life in Washington, D.C.

Saint John Paul II Academy's Robotics Club (Team 9207) is now in its 3rd year. The school's team is a member of FIRST, an international organization which promotes Science, Technology, Engineering, and Math (STEM) through various Robotics challenges. SJPII is involved in The FIRST Tech Challenge, a game mode for Middle to High School students. Since its creation in 2014, Team 9207 Skynet has participated in several FTC tournaments as a part of one of South Florida's Regional Leagues in Palm Beach. Each year through hard work and dedication, the team has qualified for The League Championship. In 2016's League Championship, the team received the honor of competing in the final rounds of the tournament. Their efforts resulted in a 2nd place finish and an Alliance Finalist trophy. The team also won back to back Think Awards for their engineering notebook, a compilation of the team's business plan, game strategies, robot designs, meeting minutes, and team information. This particular award highlights the team's ability to model an authentic engineering process reflective of what happens at real world engineering companies. One of the most important elements of FIRST is the spirit of gracious professionalism which is infused within all the efforts of FIRST teams. It promotes teamwork, kindness, professional behavior, and the idea that all teams should work together to meet their various goals -  these values are very important, and they reflect the virtues emphasized in Catholic education.

S.A.D.D. stands for Students Against Destructive Decisions. The mission of S.A.D.D. is to help prevent young people from making "destructive decisions" such as drug abuse, alcohol abuse and teen bullying. Typical activities are: Red Ribbon anti-drug distributions, positive slogans posted on walls and placed in school fences, poster-signing promising to only drive sober after the big dance and hot cocoa sales for good, clean fun at Christmas time. Our chapters motto is: "Be happy at SADD!" We meet the first Wednesday of the month.

Our mission is to engage students in service activities as “stewards of the earth” by a school-wide recycling program of paper and plastic/metal/glass and by participating in the annual mangrove cleanup in Boca Raton. We offer enriching exposure to science and health-related degrees and careers through after-school speakers and field trips.

Aimed at strengthening the school attendance at home games and all around school spirit.

Our goal is to give an extracurricular opportunity for students to experience Spanish language activities that go beyond the classroom setting. Our monthly meetings are generally formal discussions of the coming events. Our social gatherings are an opportunity to socialize, practice Spanish and participate in cultural activities.

Spanish Honor Society (Spanish: Sociedad Honoraria Hispánica) is an academic honor society focused on Spanish language excellence at SJPII and promotes a continuity of interest in Spanish studies. Its motto is "¡Todos a una!" ("All Together for One Goal"). The group, which was established in 1953 in the United States is sponsored by the American Association of Teachers of Spanish. Each society member must have taken three semesters of Spanish  and is required to maintain an "honor grade" or GPA, which correlates with the Society's mission of high academic achievement.

Our purpose is to serve the Saint John Paul II Academy community by planning and coordinating the various student activities within our school, through self government and coordination of extra-curricular activities. Our association promotes a closer relationship between the students, faculty and administration and is the voice of the student body giving every student an opportunity to be heard..

The drama club at Saint John Paul II Academy is an active member of the Florida State Thespian Society. We compete as District 10 Troupe 6471 at the one act and individual event competitions at both the district and state levels. Along with the Thespian Society, we are also an active member of the South Florida Cappies and have one show critiqued each season. We are happy to be past Cappies Awards recipients and frequently published Cappies here at SJPII. 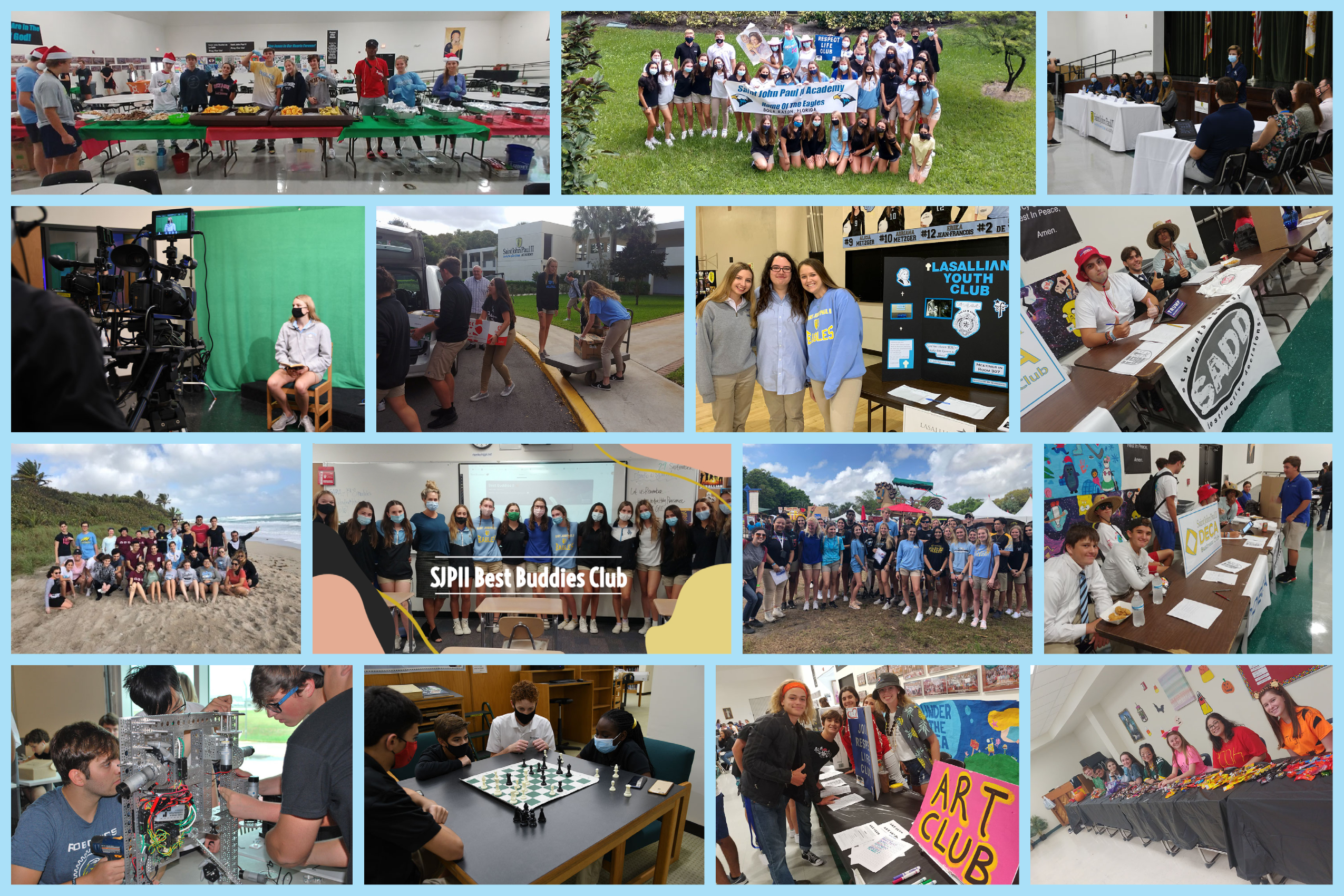 If you are interested in starting a new club, please review the guidelines here.